Who is going to design this year’s tree?

The Claridge’s Christmas Tree has long been a festive Mayfair landmark, drawing visitors and Londoners alike to marvel at its magnificent and ever-changing design.

This year’s Claridge’s Christmas Tree will be designed by Karl Lagerfeld and will be unveiled in Claridge’s lobby on Wednesday, 22 November 2017.

Commenting on the collaboration Karl Lagerfeld said “Christmas trees are the strongest ‘souvenir’ of my happy childhood.”

This is the eighth year that Claridge’s has invited a creative visionary to reinterpret the tree in their own distinctive style.

Let’s go back a little and remember the previous Claridge’s Christmas trees: 2015 marked the first time that Claridge’s had a British designed Christmas Tree. Christopher Bailey’s creation featured over 100 umbrellas, each finished in bespoke gold and silver metallic fabric, and thousands of motion-sensor lights, programmed to sparkle and glitter as guests walked by the tree. With London being at the heart of both Claridge’s and Burberry, the 2015 Claridge’s Christmas Tree was a true celebration of the two brands’ shared British heritage. In 2014, Domenico Dolce and Stefano Gabbana designed Claridge’s Christmas Tree for a second year in a row. Inspired by their childhood memories and to celebrate children of the world, the eight metre-high tree brought a magical woodland to life in the heart of Mayfair. The tree was also adorned with glass baubles that were hand-painted with international flags representing the many festive traditions celebrated the night before Christmas. Domenico Dolce and Stefano Gabbana were the designers behind Claridge’s Christmas Tree in 2013. They presented a seven metre-high Christmas tree, reinterpreted with Sicilian elements that drew on the Italian heritage of the two designers. The tree was adorned with more than 450 Italian festive glass baubles blown by master artisans and a bespoke multi-coloured ‘luminarie’ framework, created in Southern Italy. At the base of the tree were 30 hand crafted Sicilian marionettes (Pupi) made in the likeness of Charlemagne and other medieval knights, carved in wood and dressed in velvet robes. Alber Elbaz for Lanvin designed Claridge’s Christmas Tree in 2011. Alber created a dream world of colour and fantasy with his signature marionettes and a silk figurine of himself with trademark glasses and bowtie at the top of the tree. An infusion of tradition and modernity, Alber’s fantastical Christmas dream was brought to life in Claridge’s art deco lobby.

In 2010 Claridge’s welcomed back John Galliano for Dior to design its iconic Christmas Tree. The celebrated designer unveiled his spectacular “Under the Sea” creation in Claridge’s art deco lobby – a Christmas Tree made of sparkling silver leaves, pink coral, sea horses, fish, anemones, starfish and jellyfish – truly one of a kind whimsical design. 2009 marked the first time Claridge’s Christmas Tree was to be designed by a famed fashion designer. READ ALSO: This hotel in Knightsbridge is launching a dreamy Rooftop Winter Cinema for Christmas 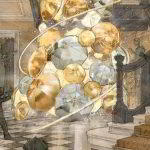