Claridge’s Christmas Tree 2021 by Dior has been revealed

Claridge’s Christmas Tree is one of the most iconic in London, created every year by a famous fashion designer. This year’s tree, named ‘The Celestial Snow Globe’ is created by Kim Jones, Artistic Director of the Dior men’s collections and evokes the idea of a magnificent snow globe: an enchanting object of desire, illuminated with magical sparkles and reflecting snowflakes, traveling across the surface of the dazzling tree. State-of-the-art holographic projections are mixed with toile, recalling the emblematic toile of the Dior Haute Couture Ateliers, and traditional pleating techniques are also highlighted, a tribute by Kim Jones to the excellence of the Dior Ateliers ‘Petites mains’.  These projections radiate from the base, upwards and beyond the tree, creating magical visuals around the space and up the famous staircase, all set against an atmospherically lit lobby. In another nod to the House’s heritage, the Christmas baubles, that seem to float in orbit around the tree, reflect Dior’s iconic motifs. These include stars – Monsieur Dior’s celestial good-luck charm – and miniature perfume bottles in the form of Monsieur Dior’s dog, Bobby, who was symbolically reinterpreted and celebrated by Kim Jones for his first Dior show. This whimsical homage to the House’s founder continues with Kim Jones’s faithful canine companion, Cookie, perched on top of the 6.5-meter tree, delicately hugging Monsieur Dior’s lucky star. The star echoes the shape of the talisman that Monsieur Dior treasured in his office – a decisive sign of his destiny that played a key role in his decision to create his couture house in 1946. Claridge’s Christmas Tree 2021 – luminous and crystalline in its transparency and purity – tells a Christmas story woven from emotions and dreams.

Commenting on his installation, Kim Jones said “It has been a great honour for me to have designed the Christmas Tree for Claridge’s this year.  I’m excited to kick off the holiday season in such an iconic British institution and to bring the festive spirit of Dior to London with my upcoming menswear show.”

The Claridge’s Christmas Tree has long symbolised the start of the festive season in the capital, drawing visitors and Londoners alike to admire its magnificent design. This is the 11th year that Claridge’s has invited a distinguished guest to reinterpret the tree in their own distinctive style. 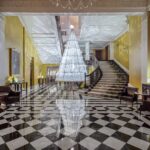 Claridge’s Christmas Tree 2021 by Dior has been revealed