If you want to live the lush life in the vibrant greek capital, look no further than these 5 star hotels in Athens!

It’s no lie: the tiny, labyrinthine streets under the Acropolis, the picturesque taverns, the alternative, boheme vibe of Psirri neighbourhood often put visitors of Athens in the mood for a cute, nest-like hotel room in the centre of the city. But then again, there are the big avenues, the beautiful riviera, and the bright athenian sky that you want to stare at from cool rooftops or a spacious veranda with a breathtaking view. Its then, when you want it all: the pampering, the gastronomy, the amenities, the privacy- you want to live the lush life in Athens.

Below fine the list of the best 5 star hotels in Athens that offer a luxurious experience you will never forget. Suite life is sweet and makes me smile

Located off Syntagma square, in what used to be the building of the Ministry of Education, Electra Metropolis is the big central hotel ment to be one of the city’s signature spots. The decoration has retro chic touches, the rooms boast a spectacular view of the city and the roof top with the pool and the famed M Bar is a meeting point for the locan bon viveurs. Bonus: in the conference centre there are actual pieces of the Themistoclean wall of the ancient city!

See all the photos I took while staying at Electra Metropolis here! The Great Room at Athens Marriot

The vibrant athenian riviera has its own hospitality gem, under the name of Athens Marriot. Combining an urban sophistication with the promise of a coastal breeze, this lush hotel blends a sleek aesthetic with old-fashioned luxury translated in hardwood floors, marble bathrooms and stunning designer pieces. Along with the stunning new restaurant e&o (coming straight from the London bar scene), the hotel’s expansive views extend to uptown Athens and the Parthenon, to Kastella Hill in Piraeus and the turquoise ocean beyond. Now this is an old time classic, both for Athenians, who pass by it on a daily basis, and for tourists. Hilton Athens is a landmark of the city that opened in 1963 on the most elegant avenue of Athens, opposite the National Gallery (an interesting tidbit is that the founder of the company, Conrad Hilton, who was present during the inauguration ceremony, said: “Hilton hotel in Athens is the most beautiful Hilton hotel in the world”). The hotel features powerful Greek elements, such as Pentelic marble and the monumental artwork of the façade by important artist Yannis Moralis, while its restaurant Byzantino and the rooftop Galaxy bar with the jaw-dropping 360 view are still considered among the most iconic gastronomic spots in the city.

Read about my staycation in Hilton Hotel Athens here. Out of the many things that make Grand Bretagne Hotel one of the most iconic hotels in Athens is its long history, entwined with the life of the city. Built across the King’s Palace, (now across the Greek Parliament at Syntagma Square) it is an city landmark, a centerpiece around (and into) which history is written- its guests have witnessed some of the most important historical moments. Keeping its coolness intact through the years, the Grand Bretagne offers the wholesome 5-star luxury experience along with high-end gastronomic collaborations, and pop-up events of the moment. It was also there, at its elegant rooftop, where I had the most unforgettable dessert of my life. Pool with a view

Located on the famous Syngrou Avenue, between the cultural center of the historic city of Athens and the cosmopolitan Athenian Riviera, Grand Hyatt Athens offers the ultimate hospitality experience in a city with a heady mix of history and edginess. Among the hotel’s highlights, the rooftop with the glass side pool and a stunning city view that also houses The Grand by Interni, a restaurant that became instantly the talk of the town. Read here why!

Inspired by ancient Greek philosophers’ wisdom, historical landmarks, and the vibrant culture of the contemporary city, Academia of Athens combines the heritage of the city with a bold and modern exterior. Partnering with global design and architecture firm, HOK, the hotel features 60 guestrooms and suites, a restaurant bar, lounge bar, and spa, each offering visual cues from ancient Greek scholar Plato’s Three Orders: Science, Philosophy and Art, with these principles brought to life throughout various spaces within the hotel. Bonus: once a week at Academia of Athens, guests are invited to become part of the “Dialogue Soirees”. Echoing Plato’s writings, which are universally known as Plato’s Dialogues

5 of the best boutique hotels in Athens It’s official: These are the Greek hotels of the year
February 2020 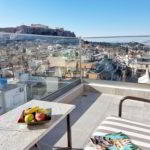