HOTEL LIFE  / HOW TO BE ATHENIAN

No matter how many times I have been to Hilton Athens, nothing compares to actually staying there

More than half the Athenians, either commuting or going shopping to the centre of the city pass the Hilton Athens hotel on a daily basis. Practically every day I pass in front of the hotel while every other week I have a meeting, an event or a press dinner in Hilton hotel. No matter how many times I have been to Hilton Athens, nothing compares to actually staying there. So here I am, ready to spend the next two days in one of the most iconic hotels of my city and I simply can’t wait to arrive there and for the first time check in with my luggage!

It is one of the few high rising and one of the most iconic buildings in the city. It has even given its name to the surrounding area. Athenians refer to a whole neighborhood as Hilton.

All about Hilton Athens

Strategically located on the most elegant avenue of Athens, opposite the National Gallery, next to stylish Kolonaki area and just a few minutes walk from Syntagma square, Hilton is a landmark of the city that opened in 1963, marking a new era of prosperity and development for the Greek tourism. The official inauguration of Hilton Athens, which took place on the 20th of April 1963 followed by a two-day celebration, attracted distinguished guests from all corners of the world and is remembered as a historic event for the  capital. The founder of the company, Conrad Hilton, who was present during the inauguration ceremony, said: “Hilton hotel in Athens is the most beautiful Hilton hotel in the world”.

Its architectural style combines an imposing magnificence with the minimal style of Ancient Greece, created by a dissiunguished team of Emanuel Vourecas, Procopius Vassiliades, Spyros Staikos and Anthony Georgiades. As one of the buildings which defined the architectural aesthetics of the ‘60s in Greece, Hilton Athens also featured some powerful Greek elements, such as Pentelic marble and the monumental artwork of the façade by Yannis Moralis, one of the most important 20th-century Greek artists.

In 2004 a major reconstruction took place by renowned Greek architects Alexandros Tombazis and Charis Bougadelis and a new aisle was added.

Since its first day, Hilton Athens has been a hospitality choice for stars visiting the city and a usual meeting point for politicians from all around the world, as well as an integrated part of the city’s social, cultural and business life.

For us Athenians, it is a meeting point with a variety of choices. From the Aethrio which has reopened on the ground floor and boasts a relaxed environment with an art exhibition as a background, to the Byzantino which is the main restaurant of the hotel with frequent thematic gastronomic events and one of the most renowned breakfasts in the city. The pool in the summer is the place to see and to be seen.

So what is it like to spend a whole weekend in such a place in your own city?   My feeling as a hotel trotter and a fanatic lover of Athens was indescribable! I was more than excited and ready to enjoy this unique experience of having my own place in an emblematic hotel like this.

I stayed at a spacious room with a stunning view on the 10th floor which along with the 11th are the two executive floors of the hotel. This means we had access to a private executive lounge with an ongoing snack buffet where we could also enjoy breakfast.

Byzantino is the restaurant – trademark of Hilton Athens. During my stay, we tried the breakfast with the numerous options and an incredible lunch buffet that offered almost everything you could imagine,  from soups and ethnic starters to several meats cooked on the spot and a chocolate fountain!

On the highest floor and with a 360 view to remember, Galaxy is the place that steals your heart.  It is a famous gastronomic spot as well a glamorous bar that makes us Athenian want to visit often for a cocktail or a dinner under the stars of the Athenian sky!

Staying at Hilton Athens was all about memorable moments. I did my best to capture most of them and of course I couldn’t stop taking photos of my stunning room view!

Discover all about my unique experience at the gallery below! Waking up to this! View from the 10th floor Look of the day Looking at my city from here was something I will never forget! Bathroom bliss Pendant by The ArtPeckers Perfume: Twilly by Hermes Wearing a 4Avril skirt and a Zara scarf 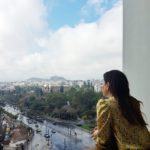