Best view hotels in Greece: 11 amazing rooms with a view

Yes, you can expect some perfect spots to gaze at the endless Aegean blue! This is the ultimate list of the top 11 best view hotels in Greece.

With “room with a view in Greece”, one immediately thinks of the signature Aegean blue -and is absolutely right to do so, for the most part. The historic center of Athens has its own unique beauty and gazing at the impressively lit Acropolis under the night sky from your balcony, is the best way to say “Goodnight” to the city. However, there are many more panoramic spots to enjoy in Greece. The room 301 which is the master suite of Kyrimai Hotel seems literally suspended over water. With four windows and a balcony offering a 180° captivating view to the open sea, it is one of the most impressive and atmospheric hotel rooms I have ever visited. Located in one of the most famous beaches in the world, Kensho Psarou Mykonos is a zen Cycladic paradise. Its 30 luxurious suites, decorated with custom furniture in a soothing colour palette of white and earthy tones, offer endless chill vibes with a view over Psarou beach crystal waters. Discover more about this very cool new entry here! On an island that is all about views, it is really challenging to find the perfect spot -yet, Chic Hotel ranks really high on the list. Attached to my room, there was a dreamy, arched veranda with a jacuzzi that overlooked the big blue of the Aegean Sea, the Skaros rock, and the whitewashed houses of Fira -a breathtaking image that changed colors throughout the day. Oh my! Sometimes simplicity is the best -and days at Anemi Hotel Folegandros define “easy summer living”. Gazing at the stars from my balcony which overlooked the port lit up at night was a must to make me completely unwind. See more here! As revealed by its name, the Tower Suite of Mandraki Beach Resort is a recently renovated suite situated on the tower of a 17th-century historic building, hidden in a picturesque cove on the east of Hydra island. See more here Patmos island is a true “revelation” with lots of famous sites -most prominent of which is the Cave of the Apocalypse, where the Book of Revelation of the New Testament was written by John the Apostle- all waiting to be explored.  Nevertheless, Patmos Eye simply does its magic and you always end up glued to the veranda, hooked on the panoramic view which is a feast for the eyes and senses. See more here During my stay at the world-famous Costa Navarino, I had the chance to visit the luxurious private Methoni Villa. Here, the view is a typical Greek scenery -the sea with a touch of greenery. Simple, clear, serene and peaceful -all one could ask! And now a different aspect of “room with a view in Greece”, at the elegant, historic Hotel Grande Bretagne, with a room overlooking the Greek Parliament and the National Park. Freshly opened at the most idyllic peninsula of Athens Riviera, Four Seasons Astir Palace is the city’s equal to the island’s room with a view. Most of the hotel’s suites offer azure sea views from every angle, with a touch of serene simplicity combined with the vibrant riviera life. See more than 30 photos of the amazing resort here! One of my personal highlights at the Poseidonion Hotel was the view from my room. I loved to throw open the window and gaze at the contrast between the green wooden shutters, the azure waters of the Argo-Saronic, and the intricate motif of the traditional iron balcony. Dexamenes Seaside Hotel is more than just a hotel -it is an architectural project. A former wine factory with rectangular tanks that were converted into beachfront suites, after they were cut open on one side so as to gain unobstructed view as well as access to the sea. A thoughtful mix of comfort and sophistication in the decoration, coupled with a chill view of the sea! See more photos of this amazing new Greek hotel here

A definitive list of the best hotels in Peloponnese 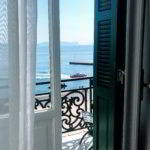 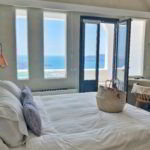 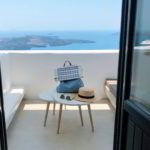 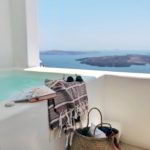 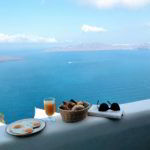 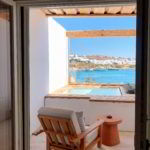 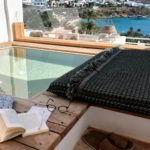 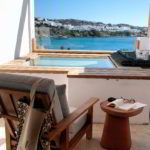 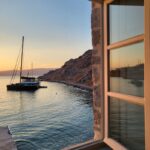 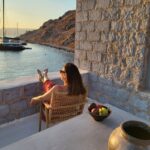 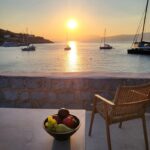 A dreamy and super stylish guesthouse at Zagorohoria
January 2023 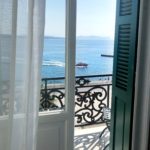 Best view hotels in Greece: 11 amazing rooms with a view