These are the best new Greek hotels for 2019

This is the list with the best new Greek hotels for 2019. In other words, six hot hotel openings to update your Greece bucket list!

Greece is always a good idea, especially for summer or spring- if you love the sun, the ancient monuments, the walks in the tiny streets and the turquoise hued waters on the islands then it is definitely a must for your bucket list. But what’s also impressive is the ever growing hotel scene of the country, with new openings constantly popping up, adding to an already busy map of hospitality gems. From luxurious 5-starred resorts in the athenian riviera to secluded boutique hideaways in Santorini, these are the most outstanding hot openings to watch this year.

Below, discover the best new greek hotels for 2019: Definitely among the best new greek hotels for 2019! Located on a hillside overlooking a pristine stretch of Cretan coast, the village-like boutique resort is especially aimed at families. It was built from scratch and it relies strongly on Casa Cook’s trademark design cues, while adapting to its new location on the outskirts of the historic harbour city of Chania. The resort offers a bespoke concept for both young children and teens, a big pool and a tropical vibes restaurant and bar. Looks like a family’s dream vacation (and it probably is, too).

The newest addition to the Andronis Exclusive family of five-star hotels is named after the mythical home of the god Pan. Arcadia (Arcadia, known as a place of natural harmony and pastoral enchantment) is located on the fringe of picturesque Oia, just a quick stroll from the village centre. Every suite has its own pool, situated to capture the magical views towards the caldera and the island’s unforgettable sunsets. Among the hotel’s highlights is the pool with underwater music, the spa and the Opson restaurant, where the menu is based on the dishes enjoyed by philosophers such as Aristotle and Plato. Following a significant renovation and reinvention, Four Seasons Astir Palace Athens Hotel is the ideal choice for guests who want to experience the best of ancient and modern Greece! Located at the most idyllic peninsula of Athens Riviera offers 3 types of housing (with a highlight of 61 renovated Bungalows nestled among the trees at the water’s edge), three private beaches and swimming pools, a spa and an in-house collection of close to 2,000 works by mostly contemporary Greek artists. A serene shelter, protective as an “Ark”,  the White Ark is more than a luxury hotel. It is a passage to a world of serenity, minimalistic at heart and eclectic in style, comprising of just 3 suites protected from the wind and the buzz of the otherwise beautiful Fira town, the island’s capital. Following the traditional Cycladic architectural style infused with a modern design philosophy, the all white interiors offer comfort, relaxation and stunning views. Gazing on Caldera views, indulge with Mediterranean flavors and rejuvenate with massages and therapies, are all included here. Paros island has its own brand new hot opening which invites guests to experience the iconic Greek summer through all five senses! Located in one of the island’s most beautiful areas at Marpissa, Summer Senses is a 5* hotel that involves the scent of the Cyclades, the sound of the waves lapping on the shores, the magical views of the Aegean and its traditional architecture, as well as the touch of the warm island soil speak to all the senses, reaching a climax with the taste of the succulent dishes served at the Galazia Hytra restaurant. Having taken its name from the Ancient Greek word OMMA (ὄμμᾰ), meaning vision, Santorini’s newest arrival focuses on the element of discovery through all of one’s senses.  Situated on a unique spot offering breathtaking 360 views of both the Aegean Sea and the Caldera, OMMA Santorini creates a tranquil atmosphere with Cycladic and minimal design tones, indulging accommodation, inspired personalised services, high-class gastronomy and pure authentic tastes perfectly complement each other to offer a unique holiday experience. Win a getaway to Prima Vista, an elegant and luxurious boutique hotel in Syvota
June 2020 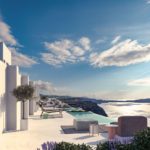 These are the best new Greek hotels for 2019