This is one of the most artistic Hotel Christmas Trees in London for 2019!

The hotel is launching its annual Christmas tree in collaboration with British artist and design wunderkind Luke Edward Hall. This year’s tree, ‘A Christmas Dream’, resembles a particularly playful take on the traditional Christmas tree, complete with hundreds of colourful lights, vintage baubles and oversized decorations. The renowned florist designer, Mark Colle, has created a six-metre treestructure covered with fresh pine greens, to provide a blank canvas for Hall’s design: ‘A Christmas Dream’. Reaching almost twenty-feet, in the grand Georgian lobby of the hotel, the tree stands out among Christmas Trees of 2019 in London. The crowning glory of the installation is a majestic golden galleon, an object which, to Luke, represents “the notion of drifting off into a dream, or being taken to a magical land.” One of the most amazing hotel Christmas Trees in London Luke Edward Hall had been gathering bits of scrappy German tinsel and baubles from the 1980s for months in preparation. “I was inspired by the idea of a Christmas dream and classic stories about mythical lands, such as Peter Pan. So… I bought a very beautiful old wooden galleon, painted it gold and stuck it on top of the tree. It looks tiny here yet it’s actually over 75cm long and is very heavy, but with a lot of help from the hotel’s engineers, it now floats high above the marble lobby. I also just wanted to make a super jolly, colourful tree. I finished the tree off with giant cut-out illustrations of cherubs, swans, foxes, statues and busts” says the artist.

Mark Colle is one of the most sought-after individual florists in the world and has become a go-to for the fashion and creative industries, making a name for himself creating installations for the likes of Raf Simons at Dior, where he made the acclaimed backdrop for the Christian Dior Haute Couture 2012 show, and Jill Sander, as well as arrangements and projects for high-profile clients including Dries Van Noten, Chanel and The Guggenheim.

With the Christmas tree at its centre, The London EDITION’s Lobby Bar is the perfect festive destination this winter, featuring a roaring fire, billiards table and intimate seating areas for guests to gather on and celebrate with friends and family. The facade of this hotel is a crystalized, glittering gingerbread house!
November 2022 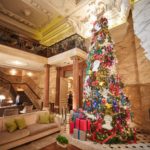 This is one of the most artistic Hotel Christmas Trees in London for 2019!