The new Netflix series offers a journey to the Recency – era high society world of London! Which is the hotel among Bridgerton filming locations?

Bridgerton is already one of the 5 most-watched original Netflix series even though it premiered a few weeks ago, on Christmas Day 2020. Both the plot at the high-society London during the 1800s and the opulent costumes as well as the unique filming locations are among the reasons why this period drama series has become so popular. With most people in quarantine and in a binge-watching mood, the star TV producer Shonda Rhimes offered the audience precisely what they needed at a Christmas period that would be like no other, a true feast for the eyes. Can you think of anything better than a tour to the most fabulous parks and gardens and the grandest estates of English country together with a dose of gossip-girl – style narrative, scandalous stories and tons of opulent gowns (about 7500 of them to be accurate)?

A hotel among the Bridgerton filming locations

An iconic hotel and museum of Bath, the five-star Royal Crescent Hotel & Spa plays a starring role in the series as the facade of the Featherington’s London home. The hotel is situated in the centre of one of Europe’s most splendid 18th-century architectural masterpieces, the Royal Crescent in Bath and has been also used as a location at films such as “The Duchess” and “Pride and Prejudice”. Offering spectacular views of the city and surrounding Cotswold hills, it features 45 individually decorated suites and guest rooms that overlook either the Crescent lawn or the hotel’s private walled gardens. One of the greatest pieces of Georgian architecture in the UK, the Royal Crescent Hotel & Spa, which is among the most splendid Bridgerton filming locations, was designed by architect John Wood the Younger and was built between 1767 and 1774. The Royal Crescent Hotel & Spa is among Bridgerton Filming Locations The Royal Crescent Hotel & Spa is among the Bridgerton Filming Locations

The hotel’s evolution dates from 1950 when a distinguished guesthouse was opened at No 16 Royal Crescent. In 1971, No 15 was added, and The Royal Crescent Hotel was born. It was not until 1978, however, that the hotel’s original interiors were restored to their former glory under the vigorous ownership of hotelier John Tham, who stripped out every last partition, false ceiling and other unwelcome modernisation.

In subsequent years several adjacent rear gardens were acquired and dramatic improvements made to the adjoining coach houses, stables and mews properties as the historic hotel established a unique reputation for luxury and service. Topland Group is one of the largest privately-owned international investment groups and has been the caring custodian of The Royal Crescent Hotel & Spa since 2012. The Group’s principal activity is Commercial Real Estate, with a portfolio of 270 properties, including a large portfolio of Hotels. Topland Group’s experience in the sector has guided the meticulous restoration of The Royal Crescent Hotel & Spa, resulting in the stunning heritage hotel of today, heralded a British icon reborn.

How to decorate a bedroom like a hotel: 8 Easy hotel-style bedroom ideas to bring at home Claridge’s Christmas Tree 2020: It has just been revealed!
December 2020 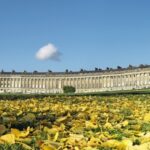