Take your The Crown obsession off-screen with this royal getaway!

Obsessed with The Crown? Yeah, me too. The royal scandals, the drama, the costumes reviving the 80s -it is all the world needs to entertain and escape the strange reality of 2020. The iconic Drake Hotel in Chicago took the royal fascination a step further, by launching a princess Diana-inspired holiday package!

In a minimum of two overnight stays, guests can sleep in the exact same suite princess Diana slept in almost 25 years ago, in 1996. She stayed in what was known then as the hotel’s Presidential Suite and it has since been named after her, its interiors remain largely unchanged in her honor.

The holiday package under the name “Crowning a Lady” isn’t merely inspired by where Princess Diana rested – a 1,500-square-foot opulent suite- but it also focuses and gives life to some of her favorite things, some of which include: a stationary bicycle; fresh forget-me-nots, (her favourite flowers) that are placed throughout the suite and sourced from the hotel’s Mangel Florist. To complete the experience, guests can indulge in an exclusive afternoon tea service at the hotel’s Palm Court, sipping Princess Diana’s favorite tea, Rose Pouchong, and in the evening, they can enjoy an unforgettable dinner with the same three-course menu served to Diana, plus her cocktail of choice, a Peach Bellini.

How to decorate a bedroom like a hotel: 8 Easy hotel-style bedroom ideas to bring at home

The Best Hotel Candles to gift this year

Delicious recipes from famous hotels around the world 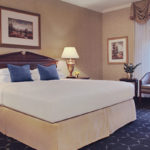