3 hotels serve as a background for the famous Netflix series. Αre The Queen’s Gambit hotels real?

It is one of the most popular and appraised TV series now. The Queen’s Gambit appeared at the Netflix menu a few weeks ago and managed to capture our hearts with its original story based on a book by Walter Tavis.  The story is about Beth Harmon, a young girl who reveals an astonishing talent for chess in a 50s orphanage and begins an unlikely journey to stardom while grappling with addiction. Apart from the captivating plot and the heroine’s immaculate style, there are also stunning sets and locations, rich in details of the Cold War era during which The Queen’s Gambit takes place. As α chess champion, Beth takes part in numerous tournaments, traveling the technicolor universe of the 60s and staying at luxurious hotels around the world. Among the awesome locations of the popular Netflix series, there are three hotels that serve as a background to the story, sometimes stealing the show with their ambiance and design. Let’s see them!

Episode 3 “Doubled Pawns”: Ιn 1966, Beth and her stepmother travel to Las Vegas for the US OPEN competition. The moment we see the two women approaching a modernistic building and entering a lobby that looks like a mid-century design heaven, we fall in love with the so-called Hotel Mariposa. Bold geometric patterns and a palette of pastel colors create an alluring retro aesthetic in both the lobby and the rooms. Furniture and architectural details that seem to have been designed by famous Scandinavian masters are everywhere making us wonder where this amazing hotel is. Photo: Courtesy of Palais am Funkturm

Well, the hotel is fictional but the building is real. The actual building is located at Messe Berlin and is a big exhibition center built in 1950. Full of retro charm, The Palais am Fukturm was designed by Bruno Grimmek and built in 1956.

In episode 4 “Middle Game”, Beth and Alma travel to Mexico City for one more chess tournament.  They are very happy to stay at grandioso Aztek Palace which evokes the vibes of a landmark hotel, located at an iconic spot of its city. Again the set is located in Berlin. The hotel exterior is actually the façade of the new building of Friedrichstadt-Palast, which opened in 1984. The lobby featured in the series also belongs to it. The enormous building is the last historic landmark building that was built in the GDR. After the fall of the Wall, the Palast established itself as the first address in reunified Germany for extravagant and spectacular show entertainment.

During the final episode, Beth, who is at the peak of her career as a chess champion, travels to Moscow in an immaculate 60s wardrobe and stays in a hotel with an imposing Soviet-era architectural style. Grey colors, massive proportions, and austere lines, all trademarks of the socialist architecture, come in contrast with the pop, curved shapes of Las Vegas. 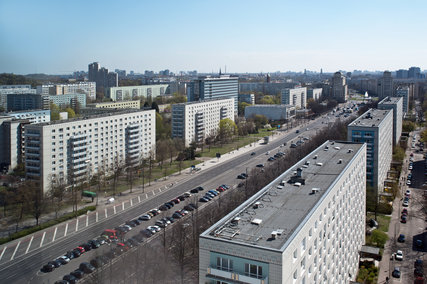 The façade belongs to a block of flats on Karl Marx Boulevard again in Berlin,  a monumental socialist boulevard built between 1952 and 1960 in Berlin Friedrichshain and Mitte. The scenes at the hotel restaurant were filmed at Kino International. Completed in 1963, Kino International was one of East Berlin’s premiere theaters before the fall of the wall. Now it serves as a historic gem that shows selected pictures and hosts the occasional soiree. Along with the glamorous 60s style décor, the building design invites visitors to step back into a different epoch in the city’s history.

It seems the architecturally volatile city of Berlin proved to be the ideal source for locations of the production of The Queen’s Gambit, featuring a large scale of architectural styles from post-war modernism to austere soviet style created by the German Democratic Republic.

Delicious recipes from famous hotels around the world 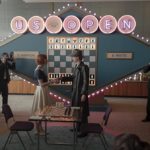