The White Lotus 2 Hotel: Does it really exist?

The successful series The White Lotus which follows the exploits of guests and employees at a luxury resort over the span of a week just premiered for season 2.  At The White Lotus 2, the real star is again the hotel which is no other than San Domenico Palace A Four Seasons hotel in Taormina, Italy.

The exclusive Sicilian resort is the ideal setting for the plot of The White Lotus 2 to unfold. San Domenico Palace is a real Grande Dame with a long history. The former 14th-century convent turned grand hotel enjoys a spectacular location overlooking the Ionian Sea, with majestic Mount Etna to its right and Taormina’s iconic Ancient Theatre to its left. The Hotel, a former Dominican convent, was born in 1896 when Taormina became a popular stop on the famous Grand Tour, a journey throughout Italy loved by Europe’s elite – royals, aristocrats, industrialists, artists and writers. Thanks to its treasure trove of art and history, the Hotel is like a museum, worthy of being toured with an expert. As such San Domenico Palace now provides an Art Concierge service. Guests can enjoy a guided tour of the hotel with a Highly knowledgeable guide, which starts in the Grand Cloister and ends in the spectacular gardens.

With its 111 guest rooms and suites, San Domenico Palace has an Old World grandeur but still retains an intimate atmosphere – it is one of Italy’s most iconic and unforgettable destinations. The most coveted room is the Royal Suite, with principal rooms all opening onto a large terrace and plunge pool with views of Mount Etna, the ancient Greek Theatre and the Ionian Sea.  Terraces are lined with glass for infinity views, and in all, there are 19 rooms with private plunge pools. The origins of San Domenico Palace in Taormina reach back to the year 1203, with the founding of the Dominican religious order by Saint Dominic in Toulouse, France.

One of the most important religious organisations in the history of Catholicism, the order spread across Europe, leading to the establishment of a San Dominican convent in Taormina in 1374. The convent was first based in a small church. (At this point in history, a convent could imply a community of either monks or nuns.) Many religious communities were supported by rich patrons, and for the Dominicans in Taormina, their benefactor was Baron Damiano Rosso d’Altavilla (for whom Rosso restaurant is now named). Rosso made his first gift to the order in 1388 and converted to the monastic life himself. His largest gift was given in 1430, five years after his death, having bequeathed his residence to the religious community so that it could be turned into a convent. His home was the oldest in Taormina, situated next to the church of Santa Agata, in a beautiful location overlooking the Ionian Sea. The convent was established and remained a small community, never exceeding 40 members.

In 1866, more than 400 years after the death of Damiano Rosso, a new state law was passed, designed to suppress religious orders and confiscate their assets. Representatives of the new Italian state came to take possession of the valuable convent building. Just a single monk remained, Vincenzo Bottari Cacciola, and he did not want to abandon his centuries-old cell. The government officials actually had to use force to take the keys. Offended by the arrogance of the state and convinced of his own righteousness, the monk decided to take action. He unearthed an ancient document that had been kept in secret by the brothers: the original will of Damiano Rosso. It stated that the property had only been lent to the Dominicans – meaning it could not be requisitioned by the state.

The monk took the will to a descendant of Damiano Rosso who was then able to reacquire ownership rights to the convent. The monk was permitted to remain in his cell for the rest of his life, satisfied at having punished the anti-clerical state. The building’s new owner was Prince Cerami (for whom Principe Cerami restaurant is named), and it was his vision to transform the convent into a hotel. In 1896, he added a large wing in the Liberty architectural style, creating one of Europe’s first grand hotels.

At this same time in the late 1800s, Taormina was becoming a fashionable location for European tourists, attracted by the beautiful scenery and the town’s reputation for wild parties and a liberal sexual atmosphere. Capitalizing on this reputation, the hotel soon found success, becoming one the most renowned destinations in the world.

Eventually, the Cerami family rented the complex to a hotel management company called SGAS (Società Grandi Alberghi Siciliani), which at the time managed many of Sicily’s most prestigious hotels. Several years later, the family sold the hotel to SGAS.

Through the early 1900s, the hotel’s reputation grew, attracting nobility and famous writers and artists, such as King Edward VII of England, the second Baron Rothschild, Oscar Wilde and DH Lawrence. During World War II, San Domenico Palace was used as a headquarters by the German army, and as a result, it was bombed by the Allies in 1943. The convent’s church was almost totally destroyed and required reconstruction, using elements of the original architecture. (The church now serves as the Chiesa Ballroom.)

Upon reopening as a hotel around 1946, San Domenico Palace was the scene of many over-the-top parties, where the Allies mingled with the locals and danced all night to alternating Italian and American bands.

Hidden behind the pseudonym of Miss Harriet Brown, Greta Garbo visited San Domenico Place incognito, while she stayed at a nearby villa for 29 years of holidays in Taormina. Other movie stars came to the hotel hoping to meet Garbo, including Joan Crawford and Marlene Dietrich – but she denied their every approach. Countless stars were drawn by the hotel’s magical social whirlwind, among them Ingrid Bergman, Maria Callas, Ava Gardner, Rita Hayworth, Sophia Loren and Anna Magnani.

Author Vladimir Nabokov stayed at San Domenico Palace in 1956 during the town’s film festival, where the movie of his novel Lolita was screened to great success. About Taormina, he declared, “Discovering it was the greatest emotion of my life.”

The early 1960s brought visits by Audrey Hepburn and England’s Princess Margaret. The most famous cinematic couple of the era, Elizabeth Taylor and Richard Burton, came to San Domenico Palace for a romantic escape after meeting during the filming of Cleopatra in 1963. The two returned in 1967 and had a furious argument on the terrace of their suite. The fight included Liz breaking a mandolin over Dick’s head.

More famous guests followed in the subsequent decades as the hotel’s reputation flourished. Roberto Benigni and Walter Matthau stayed here while shooting the 1988 Italian film, The Little Devil, and the 1988 French film, The Big Blue, directed by Luc Besson, was filmed in part at San Domenico Palace.

Politicians have also played a role in the hotel’s history. In 1999, George and Barbara Bush held a luncheon for 60 friends at the hotel, while holidaying on a yacht. In May 2017, San Domenico Palace hosted world political leaders during a G7 summit meeting, furthering the hotel’s reputation as an international gathering place.

Now, this iconic destination has begun a new era as a Four Seasons hotel, promising to continue its legendary reputation for a new generation. Gstaad Palace: The legendary Alpine hotel is still living up to its 110 year myth
January 2023 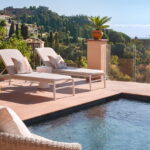 The White Lotus 2 Hotel: Does it really exist?