We loved the James Bond hotel in Matera we saw at No Time to Die and we try to locate it!

All James Bond fans that are also hotel lovers and have watched “No Time to Die” cannot stop thinking about the epic cave suite which appears in the beginning of the movie when the starring couple Daniel Craig and Lea Seydoux are at the picturesque city Matera of South Italy. Matera, a breathtakingly beautiful city in the region of Basilicata, which is also a Unesco World Heritage site, is a complex of cave dwellings. Situated on a rocky outcrop, this ancient city is known for having 1,500 cave dwellings inhabited by humans since the Paleolithic period. Although there are a lot of amazing hotels in Matera which is now a popular touristic attraction, the awesome cave suite of the movie with the three large windows overlooking the city’s unique landscape is actually a set that was specially created for the needs of the shooting imitating the cave-like houses and hotel rooms of Matera.

3 hotels that look like the James Bond hotel in Matera The Sextantio Le Grotte della Civita, placed in the oldest part of the city, features 18 rooms (some of them exceeding 160m²) and an ancient church, the “Cripta della Civita”, now used as a common area, all renovated to retain their original features. Palazzo Gattini is the hotel of Matera that contributed to the new James Bond movie offering hospitality, privacy and serenity to the movie director, Cary Joji Fukunaga, and to the main actors, Daniel Craig and Léa Seydoux. Palazzo del Duca is a 14th-century residence in the Sassi of Matera. Restored respecting its original architecture, the hotel integrates perfectly into the rupestrian context of the ancient town. 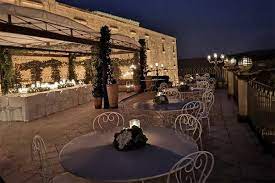 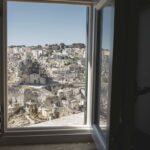