Athens in Spring: Things to do

Athens in Spring is a great idea. Although Greek temperatures are steadily on the rise, the Greek seas are slow to catch up, as they still carry the touch of winter in their swells. For most people, the sea is not warm enough for swimming, so taking advantage of the wonderful climate that Greece enjoys in other ways sounds like a great idea. Although Athens is a year round destination, it may prove less favourable to explore fully during peak summer periods, and when the islands are a much more alluring alternative. Here is how to experience the best of Athens during one of the most pleasant season of the year.

Athens in Spring: things to do during daytime Topping our list of things to do in Athens in Spring during the daytime, is definitely sightseeing. There is simply so much to discover, observe and explore, learn about that you should plan your day carefully in order to get the most out of it. Choosing where to stay in Athens also could contribute to your quest towards discovering the best of the city, with minimal effort. AthensWas design hotel in Athens is situated right at the heart of the ancient city, a stone’s throw away from the renowned landmarks. This exceptional hotel offers Acropolis view suites, so you can literally soak in Parthenon views throughout your stay in Athens. The Temple of Olympian Zeus and Hadrian’s Arch is a few minutes from there, as is the impressive Acropolis, its museum and the Herodion Atticus theatre. You can continue to saunter around the iconic Dionysiou Areopagitou street at your own pace, taking in the astonishing aura of your surroundings, until you get to Pnyka. A relatively easy hike upon this ancient hill will reveal a magnificent view of the Acropolis and the entire city of Athens. For immersing further into information that leads to a greater understanding of what each landmark represents, you can take a half day tour of Athens with a guide, thus ensuring you don’t miss a single detail.

Since all this exploring is bound to work up an appetite within you, it’s time to check the local food scene. If you are staying at AthensWas, during the weekends they serve an impeccable brunch on the rooftop, offering guests a truly indelible experience: delectable food with immaculate views of the Acropolis. In fact, you can taste the wonders of modern Greek cuisine with an exquisite dining experience at its Sense Restaurant rooftop with mesmerising views of the aforementioned monument. For a more laid back, snack choice on the go, you should try the ‘koulouri’ for a quick bite while you stroll around, a sesame seed bread ring from one of the local vendors called ‘koulourades’. Sticking to savouring the traditional, in case you want something a little bit more moreish, then a ‘souvlaki’ will definitely cut it. Try the legendary ones in Monastiraki square that have been a long time favourite among locals and tourists alike!

Spring is a time when we typically swap our winter wardrobe and make way for more floaty, airy clothes. Athens has an impressive high street shopping area that is literally a street full of fashion brands for all preferences. This is Ermou street and it should be your starting place, however if you are designer aficionado, then go to the area of Kolonaki, Athens’ most posh neighbourhood where you will find Louis Vuitton, Dior, Hermes and other top notch stores. In Monastiraki there is a vibrant market brimming with stores and stalls that sell anything from souvenirs, to handmade sandals, faux and real jewelry to music records and band t-shirts. Even if this type of shopping is not exactly up your street (pun intended), it is a must-see spot for experiencing the more picturesque side of Athens.

Athens in Spring: things to do during nighttime Athens by night is a diva and a tramp. Now let’s justify that statement. Athens nightlife is very diverse and usually ends when the sun comes up. There are posh cocktail bars, interesting dive bars, lounge bars, rooftop bars, casual ‘koutoukia’ and ‘rakomeladika’, beer pubs, live music stages and the list goes on. In which direction you do depends entirely on your mood.

They are differentiated by atmosphere and budgets, while in order to get a taste of one of each you don’t have to travel far. The centre of Athens has it all. Koukaki is a hip neighbourhood of Athens, within walking distance of the Acropolis and there you will find an array of options, and one of Athens’ oldest bars called Palio Radiofono among others. Over to the other side, in the areas of Monastiraki and Thiseio you will find more contemporary, rooftop bars with lovely views as well as rock bars and the famous ‘rakomeladika’ that typically serve rakomelo, a delicious concoction of the spirit Raki and honey. It is customary to get a decanter of this homemade sweet drink and share it around the table. On the side streets of Ermou you can discover various other types of bars, and one that doesn’t even have a sign, it is only known by its address at 12 Lekka street by the name of Speakeasy.

Just at the foot of the Acropolis’, on its northeastern side, is the most quaint neighbourhood of Athens: Anafiotika. It is in the area of Plaka and is actually one of the oldest neighbourhoods in the city. Scenic and quaint, its appearance will remind you of many Greek island settlements, with whitewashed houses and cobblestone alleys and paths that will take you through the labyrinth of residences, ‘kafeneions’ (traditional cafes) and a plethora of tavernas. Built on an incline, there are quite a few steps to take, but if you take the route from Dionysiou Areopagitou all the way around the Acropolis’ perimeter, you will get to Anafiotika’s highest point and go down the steps. Stop for a meze dinner, that is perfectly complemented by Ouzo, Tsipouro or Raki. Occasionally some tavernas will also have a live band playing traditional Greek songs, and it is a common sight for the sitting guests to sing along with them, creating an amazing ambiance. Athens during the nighttime exudes a certain magical aura; the moonlight, the starlit sky and millions of lights like artificial fireflies that blaze through the darkness. The Acropolis is gloriously illuminated, making its presence is even more captivating and imposing. Strolling around the city centre during the night reveals an almost different city altogether. However, Athens is not just about the city centre. Don’t forget that is a coastal city too! Its environs encompass the Athenian Riviera, that spans from Piraeus to Sounion, and relatively easily accessible from the centre. The seaside areas of Faliro and Glyfada are places worth exploring in the afternoon and early evening, where you can soak in wonderful sea views as you make your way along the coast. And the city’s ancient landmarks don’t stop at Athens centre either. One of the most unmissable monuments is located in Sounion, literally on the cape. The Temple of Poseidon basks in phenomenal sunset views, perched on a rock that rises above sea level and conveying an astonishing sense of liberation and charged with the perennial grandeur of its poignant history. It is said that this is where the ancient King of Athens, Aegeas, plummeted to his death, following a misunderstanding that brought him the grave news of his son’s, Theseus, death. And so it was, that from this incident, the name of Aegeas was given to the Aegean sea. Discover this enchanting location, with a guided sunset tour of Sounion, combining comfort and for a deeper understanding of the history and legend behind the Temple of Poseidon. 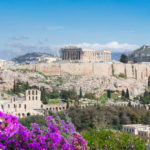 Athens in Spring: Things to do