Just a breath away from Aristotelous Square, the Excelsior Hotel in Thessaloniki is a landmark of the city. Built in 1924 in accordance with the plans of architects Pleyber – Fernandez, the neo-classical building is a true architectural jewel, . In 2009 the TOR Hotel Group breathed a new lease of life into the hotel by carrying out a radical, impressive renovation, while staying true to its historic character and retaining its traditional façade. Since then, The Excelsior has become a unique 5-star residence offering unforgettable moments to its guests. The iconic Thessaloniki hotel can be distinguished by its understated luxury and high-end services, while its privileged location in the heart of the commercial and business centre makes it the ideal destination for every kind of visitor.  At the same time, the superior aesthetics and elegant interiors, the exceptional gastronomic options and the personalised service make up a unique identity which immediately wins over its guests.

2019 marks the 10 year anniversary since the hotel’s rebirth and promises to be a year full of surprises, beautiful memories and celebratory events as part of the “ExcelsiorGR10” campaign. The hotel’s large family, friends and quests, its partners and above all else the unparalleled hospitality which it offers, take centre stage of the festivities that pay tribute to an extremely successful decade.

Inspired by the people who have been a part of the “Excelsior” experience, the campaign will reveal the most beautiful feelings and memories of important guests such as celebrities from the cultural scene, members of the city’s political and business community, as well as artists and actors from all over the world.  Meanwhile, visitors will be able to admire a bespoke photography exhibition, in which artists from Thessaloniki will capture the magnificent character of The Excelsior through their lens. In addition, a surprise collaboration with one of the largest wine producers in Northern Greece will offer visitors the opportunity to try and to purchase the anniversary Excelsior wine, which will also be served in the Charlie D. Brasserie, which bears the signature of two Michelin star French chef Arnaud Bignon.

Throughout the year, visitors to Thessaloniki will also be able to benefit from special anniversary offers during their stay, while a festive pin will prove to be a lovely souvenir to take home with them until they return once again to The Excelsior.

The “ExcelsiorGR10” campaign is planned to reach an exciting climax with a big party, in which the family of the hotel will welcome friends to celebrate the past decade all together and to toast to more to come in future. A great offer for Greek guests by Euphoria Retreat
July 2020 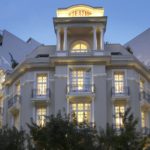