Villa Igiea is the new Rocco Forte Hotels addition and already the talk of the town!

A historical Art Nouveau 19th century palazzo overlooking the Gulf of Palermo is the new addition at the Rocco Forte Hotels, the prestigious family-run hotel group, led by Sir Rocco Forte and his sister, Olga Polizzi. The newly restored Villa Igiea, originally designed by Ernesto Basile commissioned by the influential Florio family, returns to its former glory as a jewel of the Mediterranean.

The 19th-century palazzo’s location, nestled between land and sea, makes it a perfect base to discover the extensive cultural heritage of Palermo, which provides visitors with enchanting sights and unique experiences. Built in 1900, the historic palazzo has been meticulously renovated by Olga Polizzi, Deputy Chairperson & Design Director of Rocco Forte Hotels, in collaboration with renowned architects Paolo Moschino and Philip Vergeylen of Nicholas Haslam Studios. Over the last two years, the big restoration process has enhanced the hotel’s charm and renovated the building’s Belle Époque feel. Villa Igiea’s allure has been reinstated, combining the architectural grandeur of the past with the contemporary comfort of the 21st century in the design and style of Rocco Forte Hotels. The Florio Restaurant welcomes guests into an elegant and refined, yet joyful atmosphere, typical of seaside Grand Hotels. The muted colours of the interior design, and the large floor-to-ceiling windows which reveal wondrous views of the Tyrrhenian Sea, recall the golden age. Seasonal produce, harvested locally and from the Verdura Resort vegetable garden, along with fresh fish and crustaceans, pasta, fried delicacies and arancini are just some of the ingredients of this natural, authentic cuisine.

Suspended between the botanic gardens and the Mediterranean Sea, the Igiea Terrazza Bar, is reminiscent of Edwardian high society and boasts marvelous frescoes by Palermo artist Eugenio (Geno) Morici. A wide selection of Florio liquors and drinks from the “Spirit of Igiea” cocktail list designed by the maestro Salvatore Calabrese, is inspired by Sicilian fragrances and illustrious guests who have honoured hotel the with their presence. Open from lunchtime, the bar serves a range of snacks and main dishes as well as the “Leggero by Fulvio Pierangelini” menu with its many healthy, flavourful delights. Housed in a pavilion reminiscent of Palazzo Butera, the Alicetta Pool Bar offers a tasty menu of the day with Sicilian specialities as well as raw fish dishes, sashimi, seafood, fresh fish and crustaceans ready to be grilled. Local steamed and grilled vegetables and rich mixed salads will complete the menu, with pizza and filled focaccias baked in the outdoor oven. The tempting sweet trolley offers a selection of fresh fruit and home-made ice-creams. For the opening of Villa Igiea, the concierge team has created a series of itineraries, which guarantee unforgettable memories, and allow guests to get to know Palermo, the city of a thousand faces. With its eight UNESCO heritage sites and the intense colours and scents of the local markets, this Mediterranean gem offers endless inspiration for discovering the city’s historical, architectonic and landscape delights.

Guests can choose from the “Jewish Palermo”, “The Leopard Tour”, “Local market tour with cooking lesson”, decide to take the “Florio trail” or explore the island’s coastal roads on a Porsche cabriolet in complete freedom and much more. Get ready to enjoy the Sicilian summer like never before in this magical 19th-century palazzo!

Dreamy stay of the day: The new suites of Rosewood Castiglion del Bosco 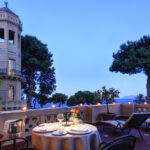