This iconic London hotel re-opened after a massive restoration

Having completed the most extensive restoration in its 117-year history, the legendary Mandarin Oriental Hyde Park opened its doors again past April. The iconic London hotel unveiled all new guest rooms and suites, including two newly created expansive penthouse suites with exceptional views of leafy Hyde Park and the London skyline. Designer, Joyce Wang, has overseen the redesign of all guest rooms and suites, along with the creation of the hotel’s new Penthouses, taking inspiration from the peaceful parkside location, as well as the glamour of the early 20th century’s Golden Age of travel. All 181 guest rooms and suites are now more luxurious and comfortable than ever before, with art deco-inspired features including carefully curated artworks and custom-designed furniture.

In every suite, guests will find a host of special additions ranging from libraries curated by the well-known historic London bookseller, Heywood Hill, to yoga mats for private practice. All accommodation comes equipped with GHD hair straighteners, Nespresso coffee makers, his and her Miller Harris bathroom amenities and Jo Hansford hair products. New York designer Adam D. Tihany, has overseen the redesign of the next-generation Spa at Mandarin Oriental, London. In keeping with the fresh new look, the extensive spa menu has also been enhanced to include exclusive partnerships with some of the most sought-after health and wellness experts in the world. The new spa features 13 individual treatments rooms, an Oriental Suite with two massage beds and a Rasul water temple, a room designed for traditional ASANTE Chinese Medicine consultations and treatments and a Bastien Gonzalez Pedi:Mani:Cure Studio – the first of its kind in the UK. The Restaurants and Bar

Adam D. Tihany has also overseen a light refurbishment of Dinner by Heston Blumenthal, Bar Boulud, London and Mandarin Bar. The Rosebery, known as the Bennett Tearoom in the 1920s, will offer a special 1920s Afternoon Tea, while Mandarin Bar has created a series of special cocktails named after celebrated guests and iconic events that took place within the hotel. Having hosted royal parties and glamorous events since the 1900s, the hotel’s Ballroom and Loggia have also been lovingly restored to include 24-carat gilding of many original features.

SEE ALSO: Checking in at the dreamy Kimpton Fitzroy Hotel in London Which is the hotel in Hollywood Netflix Series?
May 2020 Best Christmas decorations 2019: Art and festivities at the most luxurious hotels of the world!
December 2019 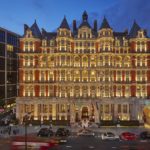 This iconic London hotel re-opened after a massive restoration