With retro-futuristic interiors and Manhattan vibes, The Standard hotel is raising the city’s hospitality standards!

It has been a sensation in both New York and Hollywood, and now London has its own version of it: The Standard London is the city’s cool new hotel entry. Shawn Hausman transformed the inside of a brutalist building at King’s Cross (formerly occupied by the Camden Town Hall Annexe), creating bold, colourful interiors as a lighthearted break from the “the greyness of London”. The vivid reception sets the tone for mixing patterns! Some of the suites have their own terrace with an impressive view and an outdoor bathtub and truffle crisps and vegan protein balls can be found in the mini fridge. As for the restaurants, guests can nibble off small sharing plates at Isla, enjoy a more casual beer and hot-dog situation in the Double Standard bar or indulge in a Michelin-starred culinary experience in the top floor restaurant run by top chef chef Peter Sanchez-Iglesias. Got to love the bathroom colour palette

Just a ten minute walk from Central Saint-Martins, the freshly opened Standard London blends in with the youthful, rigorous, lively crowd of the neighborhood, making sure to live up to its hype- the cool events and projects at its ground-floor library are a not-to-miss! A definite stop for London visitors.

See more photos of the cool new hotel in the gallery below: The iconic facade in the heart of King's Cross Welcome to the bar (notice the tiling) See also: The best afternoon tea in London is served in these hotels Claridge’s Christmas Tree 2022: It has just been revealed!
November 2022 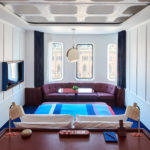