The Painter’s Room: The new bar of Claridge’s hotel

Claridge’s unveils a new addition to the legendary Mayfair hotel, with the opening of The Painter’s Room, a new bar on the ground floor of the Art Deco landmark.

Conceived by interior designer Bryan O’Sullivan, with a creative installation by artist Annie Morris, this intimate setting, under the direction of the new Director of Mixology Nathan McCarley O’Neill, is set to be home to the next generation of ground-breaking cocktails at Claridge’s. With a back story rich in art and design, The Painter’s Room is named as a homage to the same space at Claridge’s that was created in the 1930s with murals by renowned artist Mary Lea. This becomes the third bar at the hotel joining the dark and glamorous Fumoir and the iconic Claridge’s Bar. Located in the space that bridges Claridge’s celebrated ballroom and the Talking Heads Gallery by Artist in Residence David Downton, The Painter’s Room has been reimagined by Bryan O’Sullivan, inspired by old photos from the archives in the 1930s. The aesthetic pays tribute to the hotel’s Art Deco design heritage, with pale pink onyx featuring prominently. The bar, in this blush-coloured stone, is the centrepiece and is complemented by a feature skylight in peach and cream coloured glass. The metalwork in this skylight takes inspiration from the signature deco design doors of Claridge’s, and in the centre is a show-stopping, intricate Deco light. British artist Annie Morris has been specially commissioned to create an installation that runs across the entire space. A painted monochrome mural above the pink onyx features her whimsical characters, in addition to her first-ever stained glass piece, which will be at the heart of the bar. Morris was inspired by the historic relationship between bars and artists, and how artists sit, observe, sketch and chat in bars and the mural reflects the free sketch style with which one would scribble on the back of a menu. The characters nod to the style credentials of Claridge’s and the Golden Age, with some wearing top hats and others smoking. Morris’s characters also appear on the menus and are monogrammed onto the bar teams jackets. The stained glass, made from hand-blown glass, features rich hues which juxtapose with the simple grey lines of the drawings on the walls and was originally dreamt up as a watercolour painting, which is reflected in the final piece. The entire installation has taken a year to conceive.

The drinks menu for The Painter’s Room – with a focus on cocktails – has been inspired by the culture, art and design of Europe with the menu divided into four chapters; Light, Interpretations, Complex and Clean. Ingredients are at the core of this creative process – all deeply considered, with excess ingredients left behind, to result in drinks with flavours in their purest, simplest form. ‘A standout drink is our Saint Remy – a variation on a martini – inspired by Van Gogh’s Almond Blossom,’ says McCarley O’Neill, ‘We studied the terroir of almond blossom itself – where it comes from, where it grows, what grows around it and this influenced the other ingredients in the drink, such as apple and quince.’

As ever at Claridge’s, details are key. The bar team’s jackets are traditional painters jackets, in a blue that was inspired by American fashion photographer Bill Cunningham. Food is small plates from crispy scampi and beetroot tartar. Guests will drink to the sounds of hip-hop remixes, French electro-pop and jazz.

All about Prêt-à-Portea 2021 by The Berkeley

The Bridgerton Effect is taking over The Lanesborough Hotel

Welcome to The Connaught Patisserie The Red Room at The Connaught is the most talked about bar in London now!
October 2021 Inside The Savoy ‘s Royal Suite by Gucci
September 2021 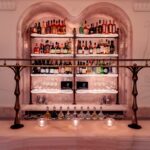 The Painter’s Room: The new bar of Claridge’s hotel