It’s not every day that you get the chance to stay in a private Parisian mansion, designated a ‘monument historique’. Located just off Avenue Montaigne, a 3-storey mansion is home to Hôtel Particulier Villeroy is about to be the new Parisian hotel sensation.

Constructed at the turn of the 20th-century in Paris’s Golden Triangle, Hôtel Particulier Villeroy recreates the atmosphere of a classic townhouse in the heart of Paris. A real home away from home with just 11 apartments, suites and rooms and a decor at the pinnacle of French grandeur. With original wood paneling, rare Calacatta marble fireplaces, intricate cast-iron railings up the marble staircase and a jaw-dropping chandelier in the atrium by Atelier Alain Ellouz, every detail adds to its feel of an intimate residence with a very Parisian spirit.

The furniture, in contrast, is contemporary, in pale shades of taupe, gray and blue that seem to complement the carved plaster ceiling in most rooms and common areas.

The hotel, which opened in January 2020, also marks the arrival of the first Buly spa in Paris, occupying the entire lower-ground floor with two treatment rooms, a Jacuzzi, a hydrotherapy shower and a heated relaxation terrace.

A room with a view in Paris: The hotels that promise stunning views

On the culinary end, the hotel is home to Restaurant Trente-Trois, led by Michelin-starred Chef Sebastien Sanjou, which revisits many French cuisine classics served on Jaune de Chrome plates, while Bar Jean Goujon is where you can enjoy a classic cocktail or one of the most unique Japanese whiskey selections in Paris. See more photos of this beautiful Parisian hotel in the gallery below. A new luxurious hotel in Paris The bathroom in Hôtel Particulier Villeroy 4 new Philippe Starck hotels you have to know
October 2020 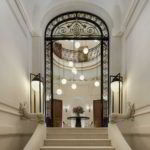