New gastronomical experiences are in store for the new season!

As the summer sun slowly sets in the Peloponnese, autumn brings new high-end gastronomical experiences to Amanzoe, where warm days and cooler nights welcome those seeking peace and quiet.

At this time of year, the Greek countryside comes to life in full color with its blooming olive groves and vineyards. For those who want to experience the season firsthand, Amanzoe is introducing a new pop-up restaurant series, with two guest chefs from Greece celebrating the fresh ingredients and flavours of the region.

On selected dates in October, renowned chefs who have shaped Greek gastronomy will serve their own exclusive tasting menus in the Amanzoe library, presenting traditional cooking methods and products from the Argolida and the Peloponnese. The chefs present progressive, creative and unique menus inspired by this heritage and explain the conception of each dish, creating an interactive experience. Guests can also choose to complement their meal with specially selected Greek wines.

Chef Konstantina Faklari has worked in some of the most famous restaurants in Greece. From the emblematic Moon to one of the most sought-after restaurants in Athens, the Zillers, her experience makes her one of the most established chefs in the country. Growing up in Vervena, Arcadia, the cook’s earliest memories include her father baking olive bread, her mother baking sweet pumpkin cakes, and picking vegetables from her grandparents’ garden. This strong culinary legacy inspires Konstantina, whose approach to cooking today is to exude nostalgia while promoting and developing Greek cuisine. The chef’s menu at Amanzoe reflects these sentiments by reinterpreting some of the region’s favorite dishes. Dimitrios Dimitriadis, one of the most renowned chefs in Greece, was born and raised in Larissa, where he began his training as a chef at the Hotel Management & Culinary School of Rhodes immediately after graduating from school. Dimitrios was deeply influenced by his grandparents, who were farmers, and his passion for food stems from spending a lot of time with them as a child and discovering an appreciation for fresh produce. Since his apprenticeship, Dimitrios has worked as a chef in numerous Michelin-starred restaurants and hotels around the world, where he learned a number of international culinary techniques. Now he works as head chef in Artisanal, a modern garden restaurant that is characterized by its distinct Mediterranean style with clear references to Greek cuisine. The chef brings his expertise to the Amanzoe and presents techniques from all over the continent on his menu in a stylish and modern ambiance. 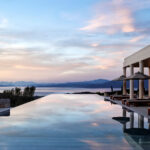