The history of the Grande Dame Hotel of the French Riviera, Hotel du Cap-Eden-Roc, in a luxurious book with documents and photographs published for the first time! All have drawn inspiration from the hotel’s enchanting setting and its lush botanical gardens landscaped with hundreds of pine trees. Over the past century, master photographers such as Jacques-Henri Lartigue and Slim Aarons have famously captured guests splashing in the Mediterranean or in the iconic seawater swimming pool of the property carved into the rocks. Situated in one of the most alluring sites on the Rivera, the Hotel du Cap-Eden-Roc remains the epitome of beauty, timeless elegance, and discretion, and has been a home away from home for generations of artists, authors, royalty, politicians, and Hollywood stars.

The history of the resort is also intimately linked to the history of cinema—since the inauguration of the Cannes Film Festival in 1946 it has always been a favorite haven for stars visiting the Riviera. Each of the remarkable decades that have led up to the hotel’s 150th anniversary, celebrated in 2020, are chronicled in this extraordinary book and brought to life through hundreds of never-before-seen photographs retrieved from a broad range of international archival sources. Alexandra Campbell the author of the book, is a historian, researcher and author specializing in 20th-century Europe. The introduction of the book is written by Graydon Carter, editor-in-chief of Vanity Fair from 1992–2017 and co-editor on the online magazine, AirMail. Other contributors include Marc Brincourt, chief photography editor at Paris Match from 1986 to –2017 and author of several books on photography; and Henry-Jean Servat, Paris Match journalist for 25 years covering the Cannes Film Festival. The old-world charm of The Woodward * Geneva
April 2021

4 new Philippe Starck hotels you have to know
February 2021 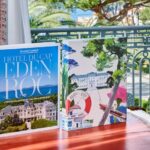