Grand Hotel Kronenhof Christmas feels like being at a Wes Anderson movie!

Imagine spending the festive season at a five-star hotel with original old-world charm, located at the heart of the snowy Alps? It sounds like a dream and this is what we are going to describe in the following lines. The dreamy Grand Hotel Kronenhof Christmas! Let’s start an imaginary trip to this Wes Anderson-like winter wonderland.

The architecture of Grand Hotel Kronenhof makes it one of the most splendid hotels in the Alps. This heritage-protected luxury-class establishment is located in the heart of the idyllic Engadine village of Pontresina, only six kilometres from St. Moritz and looks out onto breath-taking Alpine vistas with the Roseg glacier in the distance. Pontresina’s charm lies in the architectural blend of fine old Engadine houses with their typical “sgraffito” (decorated walls) from the 17th & 18th centuries and elegant Belle Epoque style buildings. Close to the two most famous peaks of the Engadine (Piz Palu and Piz Bernina), the village is a real paradise for mountain enthusiasts, as well as those seeking a quiet, relaxing break away at an idyllic winter landscape.

Best Christmas decorations at the most luxurious hotels of the world

Grand Hotel Kronenhof has a rich and interesting history, having first opened its doors in 1848 as the Rössli guesthouse. In its cellars, a Veltliner wine shop was established, along with stabling for the horses that transported the wines over the Bernina Pass. In the second half of the 19th century, the guesthouse business flourished and the then owner, Lorenz Gredig, extended the premises.

In the first half of the 20th century, tourism to the Engadine was greatly affected by the two world wars and it was mainly thanks to the wine trade in the cellars that the business survived. It was only when St. Moritz hosted a second Winter Olympics in 1948 that guests started returning to the valley in greater numbers. In 2004, Grand Hotel Kronenhof was bought by the Niarchos family, who have invested heavily in the property. A CHF 35 million extension was completed in November 2007 consisting of a large underground car park, 28 new guest rooms and a stunning spa complex covering more than 2000 square metres. Since 2016, there has been an ongoing programme of refurbishment, including the creation of 13 new rooms and suites, a cigar lounge and a billiards room by Pierre-Yves Rochon in the historic part of the hotel. The sgraffito design details, the high vaulted ceilings with the luxurious chandeliers and the authentic vintage ambiance create a unique universe that makes you feel like wandering onto the set of a Wes Anderson film. For every festive season, the Grand Hotel Kronenhof team prepares delicious meals, fun events and an elegant Christmas Afternoon Tea with crepes as well as glamorous gala dinners and many other festive highlights which enchant the guests’ Christmas holiday. Add to these fabulously decorated Christmas trees and glamorous ball rooms, all in a hotel that combines the long year experience of knowing how to do the holidays right with a contemporary philosophy on 5-star pampering.

Click on the gallery below and discover more about the magic of Grand Hotel Kronenhof Christmas!

One of the first hotels of the Alps A giant Gingerbread house made by the chef Charming vibes of another era 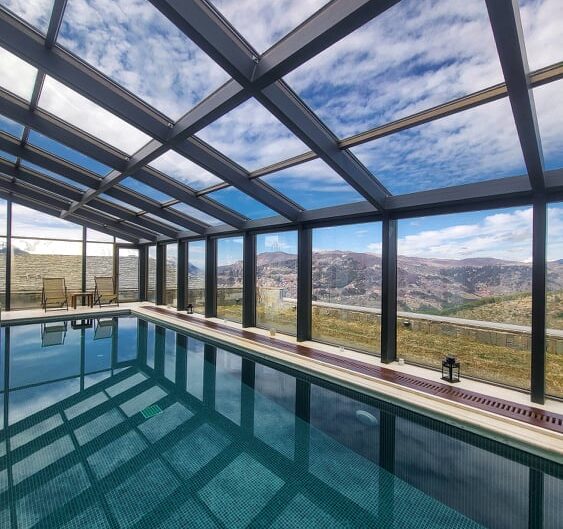 Tried and tested! These are some of the best winter hotels in Greece
February 2022 Grand Hotel Kronenhof Christmas feels like being at a Wes Anderson movie!