Hotels in Thessaloniki and the most important meal of the weekend!

This summer, I got the best news by the Thessaloniki Hotels Association about a new gastronomic concept they have launched, called ThessBrunch.

To start with, ThessBrunch is a very clever pun, since “Thess” can be both an abbreviation of Thessaloniki, and the sound of the Greek verb “θες” which means “want”.

One after the other, the best hotels in Thessaloniki and members of the Assocciation organize a brunch served over the weekends. I was invited to enjoy the one hosted by the most iconic one and a personal favourite, Electra Palace Thessaloniki. Built in one of the most impressive city squares of Greece, Aristotelous Sq., facing the endless sea of the Thermaikos Gulf, Electra Palace Thessaloniki is one of the city’s architectural gems. For us Athenians, people from Thessaloniki are always able to reach high culinary goals. Therefore, my expectations were high although I have been to lots of amazing hotel brunches in my own city. I was right to feel so. Electra Palace brunch was really awesome! A real feast that we enjoyed with a spectacular view of Aristotelous square accompanied by the jazz music of Toot Sweet duet.

We could choose from lots of breakfast favourites like pancakes, chocolate fudge brownies, red velvet cupcakes, poached eggs and salmon omelets, while there was also a big variety of pastries, jams and fruits plus a list of  salads and vegetable appetizers and several kinds of delicious mains from burgers and  mushroom pies to fried shrimps and spicy meatballs. Best of all, there were also local delicacies such as bougatsa pies and koulouri in many versions! With the elegant decor, the impeccable service, the stunning view of the city and the live atmospheric music by the Toot Sweet, Thessbrunch at Electra Palace Thessaloniki was quite a brunch experience!

At the gourmet portal www.thessbrunch.com , you can find both the Thessbrunch programme with specific dates, and the hotel that will host it each time. The launch of Thessbrunch also marked the beginning of a social media contest with the hashtag #koulouriofthemonth, where the audience can participate by posting photos, using the traditional “koulouri” of Thessaloniki as a frame, depicting various parts of the city. During the same weekend I had the chance to #reloveThessaloniki. The concept of Electra Metropolis “ReloveAthens” which invites Athenians to enjoy the city and its centre, as well as the hospitality of a five star hotel is now extended to its sister hotel in Thessaloniki! Ofcourse, Thessaloniki with its promenade by the sea and the numerous cool spots for good food and drinks is a city I can relove at any time.

If you click my gallery below, you will find all about the epic Thessbrunch buffet of Electra Palace Thessaloniki and the weekend I enjoyed so much in Thessaloniki.

A brunch to remember at Electra Palace Thessaloniki

Smoothie with the iconic view of Electra Palace Thessaloniki This was my balcony... Traditional Koulouri, the symbol of breakfast at Thessaloniki On the rooftop of Electra PalaceThessaloniki At Toms cafe, the coolest place in the city now! 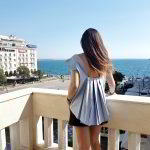