Aurora Station will be the first-ever luxury Space Hotel!

First four months of reservations are already sold out!

Would you like to stay in the first ever space hotel? Launched by Orion Span, Aurora Station will host 12-Day Trips beginning in 2022. Named after the magical light phenomenon that illuminates the Earth’s polar skies, Aurora Station is being developed by Orion Span and the company’s team of space industry veterans, who have over 140 years of human space experience.

The first fully modular space station to ever debut, Aurora Station will operate as the first luxury space hotel. The exclusive hotel will host six people at a time – including two crew members. Space travelers will enjoy a completely authentic, once-in-a-lifetime astronaut experience with extraordinary adventure during their 12-day journey, starting at $9.5M per person. Deposits are now being accepted for a future stay on Aurora Station, which is slated to launch in late 2021 and host its first guests in 2022.

During their stay on Aurora Station, travelers will enjoy the exhilaration of zero gravity and fly freely throughout Aurora Station, gaze at the northern and southern aurora through the many windows, soar over their hometowns, take part in research experiments such as growing food while in orbit (which they can take home with them as the ultimate souvenir), revel in a virtual reality experience on the holodeck, and stay in touch or live stream with their loved ones back home via high-speed wireless Internet access. While in space, Aurora Station guests will soar 200 miles above the Earth’s surface in Low Earth Orbit, or LEO, where they will find stunning views of the Earth. The hotel will orbit Earth every 90 minutes, meaning those aboard will see an average of 16 sunrises and sunsets every 24 hours. Orion Span has just revealed that just 72 hours after announcing Aurora Station, four months of reservations are sold out. Travelers from across the globe – including North America, Europe, and the Middle East – have placed an $80,000 deposit towards their future stay on Aurora Station. 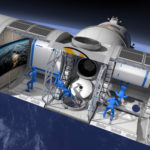 Aurora Station will be the first-ever luxury Space Hotel!