Three days filled with sculpture, music and talks in a luxurious hotel, or simply put, the ultimate alternative getaway experience in Mykonos!

Late nights, glamorous parties until the sun comes up, celebrities and endless Instagram photos: in most people’s minds Mykonos is not only considered as the most beautiful island in Greece, but also as the wildest one.

While its crazy nightlife is undeniable, there is so much more into what makes Mykonos the most iconic Greek island- think more like art galleries, high-fashion stores and exclusive events and happenings boosting the island’s eclectic character.

This summer, Further, the famed experiential, artistic project launched in 2017 by Design Hotels is coming to Mykonos. Further Mykonos: The Eternal Festival, is a three-day music and arts festival exploring topics of festivalization and cultural heritage to mark the unveiling of a large-scale sculptural installation inspired by the ancient and mythological history of the region. A major cult center of the ancient world, Delos, a small island southwest of Mykonos, became the site of what might have been the first cross-cultural festival in human history—the Delia. The quadrennial festival honored the sun god Apollo, who according to mythology was born on the island when his mother, Leto the Titaness, was forced to flee the mainland. The festival included musical contests, choruses, and dances, and was said to have involved travelers from across the ancient world due to the island’s position as a pilgrimage site and trade hub. Or, as Leto said to the island in an ancient Homeric Hymn, “feed those who dwell in you from the hand of strangers.”

Several thousand years later, festival culture is once again ascendant. Contemporary gatherings like Burning Man, Primavera Sound and AfricaBurn draw pilgrims from across the globe for communal ritual, revelry and cross-cultural musical exchange accompanied by large-scale participatory works by a new breed of visual artist. At the same time, more traditional gatherings, like the world sacred music festivals in Fez and Rajistan, are seeing a resurgence.

In honor of this lineage and the rich history of Delia and Delos, Further: Scorpios – The Eternal Festival brings the South African artist Daniel Popper to the shores of Mykonos to construct a large- scale figurative sculptural installation that reinterprets the story of Leto, building a metaphorical bridge between the Scorpios peninsula and ancient Delos.

Upon the installation’s completion we will host a weekend-long cross-cultural gathering—a mini-Delia—in collaboration with Roots Revival, an international project uniting musicians, musical styles, traditions, and instruments from across the world. The three-day music and arts festival will feature an array of panel discussions around contemporary art and architecture, the preservation of musical and dance traditions, and the history of Delia and Delos, featuring prominent panelists and moderators, such as Dezeen founder Marcus Fairs and the French architect Arthur Mamou-Mani.

Throughout the festival, conversations begin at sunset and feature a range of artists, architects, critics, and historians on topics ranging from contemporary festivalization to the preservation of music and dance traditions, and the apex between the ancient history of Delia and Delos and contemporary culture. 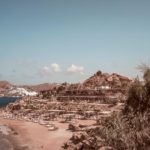