If these walls could talk… Offering a rare opportunity to acquire a piece of British history, 85 residences are available for sale in the impressive former Old War Office building, which was closed to the public for more than a century and has undergone a monumental transformation. The unique landmark of London will be completed in 2022 and will comprise the English capital’s first Raffles hotel with 125 rooms and suites, a collection of 9 restaurants and bars, and a spa. Located in one of London’s most historically important and powerful regions, the Old War Office was completed in 1906, designed by British architect William Young. In the following years, the building witnessed world-changing events as highly influential political and military leaders such as Winston Churchill and David Lloyd George had their offices there. It has also inspired Ian Fleming to write the James Bond book series while its majestic architecture has made it an ideal setting for James Bond films such as Skyfall, and more recently for the drama series “The Crown”. Ιts Edwardian architecture with high up to 4.4 m ceilings and panoramic windows have been revamped to meet the needs of the modern way of life. The interior of the houses has been edited by the design studio 1508 London, with handmade bespoke kitchens by the British company Smallbone of Devizes and onyx marbles, while many of them retain some of the original features of the building such as mosaic floors and oak wood paneling. The hotel interiors are being designed by New York-based designer Thierry Despont.

Some of the most Instagram-worthy hotels in London 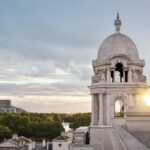