Among the biggest news of this year’s Greek gastronomy scene has been the arrival of Michelin-starred chef Jason Atherton at Mykonos and his exciting collaboration with Santa Marina at Ornos Bay. Mykonos Social at uber-chic Santa Marina Hotel Mykonos is the British chef’s first restaurant in the Mediterranean promising an enchanting gastronomic journey for Santa Marina residents and non-hotel guests. Jason Atherton’s sophisticated take on Greek and Mediterranean cuisine include classic options masterfully created by the chef, including “traditional with a twist” starters and just-caught seafood, all executed with characteristic finesse and served on bespoke plates by Themis Z, inspired by the vibes and the colors of the Aegean! The sandy beach of Santa Marina At one of the best hotel restaurants in Greece Jason Atherton started out working alongside great chefs including Ferran Adria at el Bulli, before joining the Gordon Ramsay Holdings in 2001 and launching ‘Maze’, first in London and then another five globally. In 2010 he launched his own restaurant company, Jason Atherton Ltd. His flagship restaurant ‘Pollen Street Social’ opened in April 2011 in Mayfair and was awarded a Michelin star within just six months of opening,

Since then, Jason’s ‘The Social Company’ has grown into a globally renowned restaurant group, with a portfolio of restaurants which include the Michelin-starred City Social, as well as Social Eating House, Little Social, The Betterment and Berners Tavern at London Edition Hotel– named ‘the defining restaurant of the decade’.

With panoramic views of the Aegean Sea, Mykonos Social has been a much-anticipated new addition to Santa Marina, one of the first high-end resorts in Mykonos and an all-time favourite destination among celebrities. 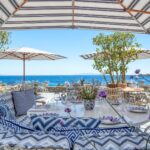