Inside the new Hôtel Martinez suite named after Isabelle Huppert


Having opened its doors during the heady heydays of the Roaring Twenties, Hôtel Martinez
instantly became a place for celebration, the embodiment of luxury and glamour that drew
society’s who’s-who and the well-heeled just passing through. With its panoramic views over
the Bay of Cannes, richly appointed interiors, esteemed guests, and incomparable aura, Hôtel Martinez has long been the quintessential symbol of the French Riviera.

A­fter the Cannes Film Festival was founded in 1946, the iconic hotel established itself as the gateway to the glittering world of moviemaking, from silver-screen stars to red carpets. Hosting the greatest icons of French and international cinema each year, Martinez has become intrinsically linked to the history of film. On the hotel’s uppermost floor, the seventh, paying
palpable homage to this very special relationship, interior designer Pierre-Yves Rochon created two splendid penthouse apartments dedicated to two unforgettable figures of the cinematic world: French actress Isabelle Huppert and Thierry Frémaux, General Delegate of the Cannes Film Festival.

Sharing a space spanning 1250 square meters (13,455 square feet) across the indoor and outdoor areas, these two apartments, with a panoramic view of the Bay of Cannes, are jewels of luxury hospitality that together form one of the largest suites in Europe. Each penthouse apartment was designed with remarkable inspiration and insight and involved
the unprecedented contribution of its namesake, as Isabelle Huppert and Thierry Frémaux both
added their own personal touches and concepts of glamour to the premises. Their respective
visions combined luxury and comfort to create breathtaking living spαces.

The Isabelle Huppert Apartment is decorated in light shades of white to gold in a wide variety of textures, from leather to silk, with custom-craed rugs dotting the simple, Cocteau-inspired décor
glowing with generous natural light.

The Thierry Frémaux Apartment was designed as a masculine boudoir with bold furnishings in
cooler tones, for a more refined, subdued style. From the bathroom resembling a celebrity dressing
room to the black-and-white tiling recalling reel-to-reel film, it is truly an ode to the festival of yesteryear. For Isabelle Huppert, Ms. Massé created a fragrance with notes of tuberose from Grasse. For Thierry Frémaux, the fragrance captures his preferences in notes of cypress, cedar, and fig leaf.
To further personalize each of these two penthouse apartments boasting large living rooms, dining rooms, walk-in closets, screening areas, and more, there are objects, books, photos, and music playlists chosen by the two ambassadors themselves. Lastly, to add an edible element, two-star chef Christian Sinicropi of the hotel’s La Palme d´Or restaurant is developing a special menu to be served in these apartments, for a complete xperience that captures all the cinematic magic of Cannes. 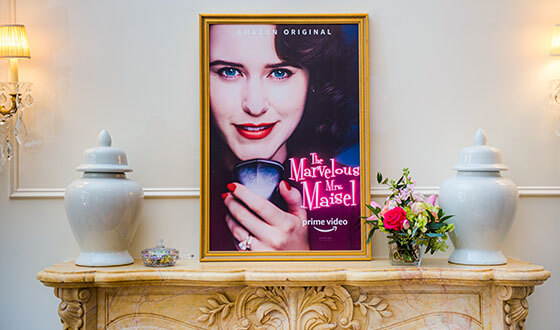 Inside the Ava Gardner Suite at Belmond Splendido Mare
October 2021

Inside the new Hôtel Martinez suite named after Isabelle Huppert