The well-known Pantelikon Athens hotel will undergo an €18 million renovation prior to rebranding under Curio Collection by Hilton, elevating the hotel’s offerings and restoring its unique glamour. Joining a global portfolio of over 100 unique hotels and resorts under the Curio brand, Pantelikon Athens’ 117 rooms will include 13 stylish suites, with guests benefiting from access to the hotel’s upmarket wellness facilities. With a fully-equipped gym, four spa treatment rooms and both an indoor and outdoor pool, guests will be able to relax and re-energise whether they are visiting Athens in the cool winters or the summer when average temperatures reach 32°C. Kifisia is one of Greater Athens’ most desirable neighbourhoods, playing host to a plethora of luxury residential properties, designer boutiques, art galleries and well-groomed parks.  Once guests have sampled the menus at the hotel’s primary and specialty restaurant, they can visit the city’s family tavernas and modern gourmet establishments, or take a trip into central Athens. Pantelikon Athens is a short walk from major attractions such as Goulandris Natural History Museum and Syggrou Forest, whereas central Athens is less than a 30-minute train or car ride away.

Kifisia is also home to several international headquarters, making the destination a business travel hotspot. With 1,300 square meters of conference and events facilities, including three meeting rooms, Pantelikon Athens will be well-equipped to host both small meetings and larger conferences for business travellers and professionals in Kifisia.

A bustling port city on the Athens Riviera, Piraeus is the largest port in the Mediterranean and is known for its lively harbour. A prime access point for many of Greece’s beautiful islands, destinations such as Aegina, Hydra and Spetses, Mykonos, Paros, Santorini and others that are less than a few hours away by boat. Hampton by Hilton Piraeus Mikrolimano will be located in Kastella, the jewel of Piraeus famed for its neoclassical architecture, close to the Mikrolimano marina with spectacular views of the port.

Following a €5.5 million refurbishment, Hampton by Hilton Piraeus Mikrolimano will offer the high-quality accommodation Hampton by Hilton hotels are known for. With four meeting rooms totalling 120 square meters and an enviable outdoor pool with breathtaking views across Pireaus and the Athenian Riviera, business and leisure travellers alike will enjoy their stay.  The hotel’s modern and fresh interior renovations will make way for a 24-hour business centre, fitness facilities and comfortable rooms, while guests will also benefit from Hampton by Hilton’s award-winning service, including complimentary hot breakfast and free Wi-Fi. Eating at the most famous hotel restaurant in Athens
April 2022 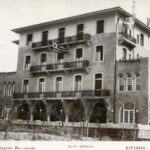